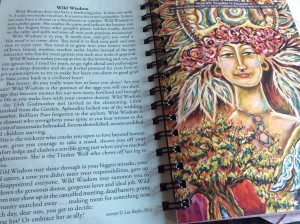 Lilith is mentioned in this tidbit shared from my We’Moon planner. Why do I feel it’s important to touch upon Black Moon Lilith? Well, for many folk, they may not be aware there is a second moon in the person’s natal/birth chart. There is black moon Lilith which reflects the shadow/seemingly invisible yet powerfully present side related opposite to the visible natal/birth moon in the chart.

This is relatively new perhaps in the astrological aspect for folx in general. Yet, She-black moon Lilith is so important as a key player especially with the current sky cosmic movements.

Lilith is also known in Hebrew tradition, via the Talmud, as many aspects named ie. Goddess, demon, rebel, dark, and so forth. My own experience with Lilith so far – She is the representative of the wild, feral Dark Goddess and the one who demands for equal partnership. She was Adam’s first wife prior to Eve being Adam’s second wife. Lilith demanded for nothing less than equal partnership with Adam. She can represent the reclaiming of Self and sovereignty of the Feminine – especially if there’s been loss of identity, be it in sex, intimacy, passion, relationships, etc.

It is said that Lilith left Adam when he was not willing and/or capable to give the equal partnership and recognition of her as his equal partner in relationship.

I can say this: Lilith can be similar to another Goddess by name of Kali where both destruction and creation happen in-tandem. So, I would say it to be very very very important in your intention and reasoning for calling either Lilith or Kali into your lives. They WILL work deep magic. It is not for the faint of heart to work with these Goddesses. It is like initiation pretty much to go into that space with them.

As we go into the Deepening and Darkening of the year, a lot of shadow work will come up for many of you until Winter Solstice – when the Light begins to rebirth and warm up more with Light and clarity to shine onto your paths coming ahead.

Remember you are not alone in this shadow work. You are loved and Seen. You are supported.

Lilith is also about reclaiming the Wild feral Self in you…. That primal energy and re-integrating  it into your Self’s core.

Clarissa Pinkola Estes’ wrote an amazing book, “Women who run with Wolves”. She is a powerful medicine worker with story telling and giving guidance in how to do Shadow work within mythos, folklore, fairy tales, archetypes, etc. It is a rich resource of healing and medicine. I can vouch for it from my own experience!

Another book that touches some on the Lilith energy via the Mysteries of blood, sex, moon, female body cycles, etcetera – “The Red Tent” by Anita Diamant. This book is written from the main character’s perspective – Dinah, the daughter of Leah and Jacob. I also recommend this book wholeheartedly!